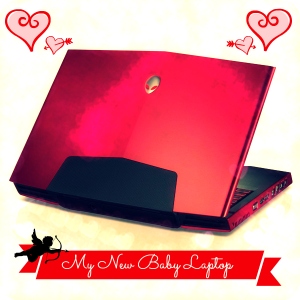 So as it turns out my 2-3 year old Dell computer finally decided to be on it’s last leg and conk out.. It was a Xmas present from my hubby and I had nothing but problems with it from the very start. It shut off on me several times during it’s warranty and right before the first year of it’s life it decided to say ” Hey, guess what Jen! I really don’t need this motherboard here so {KABOOM}, oh… there it goes!!!”….  Good thing is I had someone come and fix it for free but I’m sure it was not a very good part because it decided to be a pain and do it again… This time no warranty.
I’m not sure if it’s partially my fault that it decided to do this or because the parts were not the best quality. I play WOW a lot (I don’t raid) so maybe it’s due to that? Mayhaps the video card could not sustain the torture? Anywho, I decided some time ago that the next computer that I own HAS to be a gaming computer because I can’t deal with exploding computers so my hubby and I ordered an Alienware Mx17 Laptop.

Why a Laptop? I like the portability and we just really dont have room for another Alienware monster! Those desktops are HUGE!! I really don’t want that. We are eventually going to downgrade apartments so the less bulk we have the better. 🙂

Now comes the issue of payment… I must pay my husband back for it as it was a rather expensive item and we are really tight right now with our expenditures as I do not have a job atm.  (That’s another post! Job hunting!)  I am getting rid of a lot of my personal “I really don’t need this as much as I thought” Items to pay him back through eBay. So far I have 40 things up and some of them have sold and some of them have not.. <<cries>> The amount of stuff I need to get rid of to make the money back is painful… I’m hoping we can put some of our tax return mullah to the laptop.

Oh! The laptop has been shipped! I think it’s estimated arrival time is Feb. 14th ,which is why I have the Valentines Day motif for the image o the laptop. I also ordered it in red, since I HATE black, so yay! 😀  I will definitely put pictures up of the unboxing when I get it!

I should also look for a monetary “counter” add widget and put it up on the blog, just so I can keep track of how much money I have gathered to pay my hubby back for my new baby!